Griff says; It's just Not Right 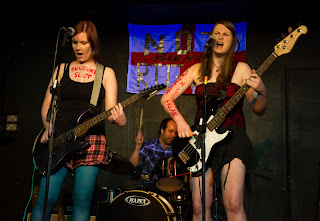 I came across a Warwickshire punk band recently called Not Right, who have a pay-what-you-like EP for download on their bandcamp page. Their facebook page sees them describing  themselves as:

" ...the lead guitarist who hates to solo, the trombonist playing percussion, the singer who just shouts. We are hatred, we are joy, we are noise for the sake of noise. We are Not Right."

Which descriptions, of course, mean that they were sure to find favour here at the Streetlamp. But, to be honest, the real reason they made an impression, among the hundreds of new tracks we listen to each month, was the tone of the lead singer's voice. You see, back in 1981, John Peel championed a late-to-the-party punk band from Stanwell in Middlesex by the name of !Action Pact! (that's right, with prefix and suffix exclamation points for added emphasis). Anyway, the group had contributed two tracks,  'London Bouncers' and 'All Purpose Action Footwear', to the Heathrow Touchdown EP, which John was most excited about. He played the songs many times throughout that year and eventually asked the band to record their first session, which they did in February 1982; recording the tracks 'People', 'Suicide Bag', 'Mindless Aggression', 'Losers', and 'Cowslick Blues'. The resulting demo tape caught the attention of the fledgling label Fall Out Records, which signed the band as the first act on its roster. !Action Pact!'s label debut, the Suicide Bag EP, was released in July 1982.

Now, I have to make it clear at this point that the main appeal of !Action Pact! was the extraordinary vocal talents of teenage singer George. John Peel at the time described her (affectionately) as:

While it isn't quite how I would have put it, I will acknowledge that  George's shrieking vocals tended to polarise opinion. You either loved them or hated them -  I, personally, loved them and went straight out and  bought the EP. Interestingly, at that time, the more progressive thinkers of the punk movement had morphed into the post-punk movement and left the field of  'traditional punk' clear to an element that had always existed at the margins of punk. This element was the boorish, macho, Sham 69 type punk who left to their own musical and artistic devices ran straight up the cultural cul-de-sac that was the Oi! movement, where they flirted dangerously with thuggish, fascist imagery before, thankfully, fading away in a cloud of disinterest. Anyway, I still recall that my championing of !Action Pact! at that time brought a few sniggers and sneers from some of these types, as the idea of a punk band being fronted by a shrieking 'bird' who wasn't just there to be leered at was seen as threatening to the lad's club mentality of the Oi! music era. Suffice to say it just made me like them even more.

All of which takes us nicely full circle back to Not Right, as they are a band who too might be expected to fall foul of  current popular prejudice, being fronted as they are by a trans woman named Ruth. Ruth was assigned a male gender at birth, but now identifies as female and it was her raging, screaming vocal performance that really caught my attention when I first heard Not Right. The other compelling aspect of the band are the extremeley honest, overtly political, perhaps even confrontational, lyrical subject matter. Naturally, we here at the Streetlamp, with our long radical and anarchist traditions are happy, no delighted, to be confronted and reminded that prejudice of all types should be challenged and so we're glad to take the opportunity to bring this band to your attention. Here's track 1 from the band's 'Punk Is Not'  EP, Balls:

I hope you enjoyed that as much as we did.  Not Right is a trio and the full band line-up is:

If you want to know more about the band, they have a very good website 'here'. When you visit please check out their free online zine, which contains some excellent material. Ruth also has an interesting wordpress blog 'here'. Please check the band's facebook page for upcoming gigs.

To finish off, here's 'Suicide Bag' by !Action Pact! for comparison, or just to take you back to the early 80s if you're a reader of 'a certain age'.: 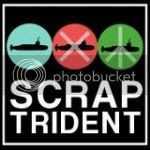