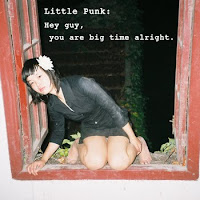 October is a funny old month; it's so melancholy, associated as it is with Autumn turning to Winter and, here in Scotland at least, the beginning of the long dark nights that last until Spring. The ancients recognised that and marked it with the festival of Samhain, a festival of the dead, and spirits, and masks and costumes and bonfires. You'll recognise that, of course, as the rest of the world nicked it from us and now call it Hallowe'en, but anyway back to the point, this also gives the month a gloss of something festive, which yet undeniably remains laced with an undercurrent of death, decadence and, dare I say it, sex. Given all this, I find myself drawn a little to darker music this weather, and I think I can promise a bit less of the soft folk stuff for a wee drop of the harder stuff for a bit. 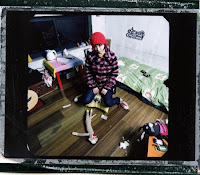 So where are these ramblings taking us, you're no doubt begining to wonder? Well today, they lead us to Xiao 'Little Punk' Pengke who has this month released her debut solo album, 'Hey guy, you are big time alright', courtesy of Qu Records. The album consists of seven heartfelt, stripped to the bare bones songs, all available as free downloads on bandcamp. The song lyrics touch on themes of disaffection, withdrawal and alienation. However, if that sounds rather too nihilistic for your pleasure I should add that there is also a glimmer of something bright, something lively, damn it, something overtly sexy within the music. Perfect October listening then. Have a listen to track no. 1, Cuties, to see what I mean:


Xiao, from Shanghai, is a poetess whose early work, to be found on myspace as 'little punk freak rnr band' would fit happily into my usual pigeonhole of lo-fi indie-folk. She also plays the keyboards and provides vocals for Shanghai-based folk punk band 'Boys Climbing Ropes'. This new solo work, however, is something a bit different again. The music is eminently simple; comprising of Xiao's stream of consciousness vocal, absolutely laced with anomie, over the top of some excellent guitar work, part punk/part surf/part folk, provided by Andy Best. Need more convincing? Then check out the smart and funny DIY video, in which Little Punk turns Hit-Girl style masked avenger, for track no. 7, 'I'm Not In the Mood for Making a Song', which can be seen here.

Here's the track on it's own: